01 Dec 2016 / by jeanpetersondesign / in Newsletter Article 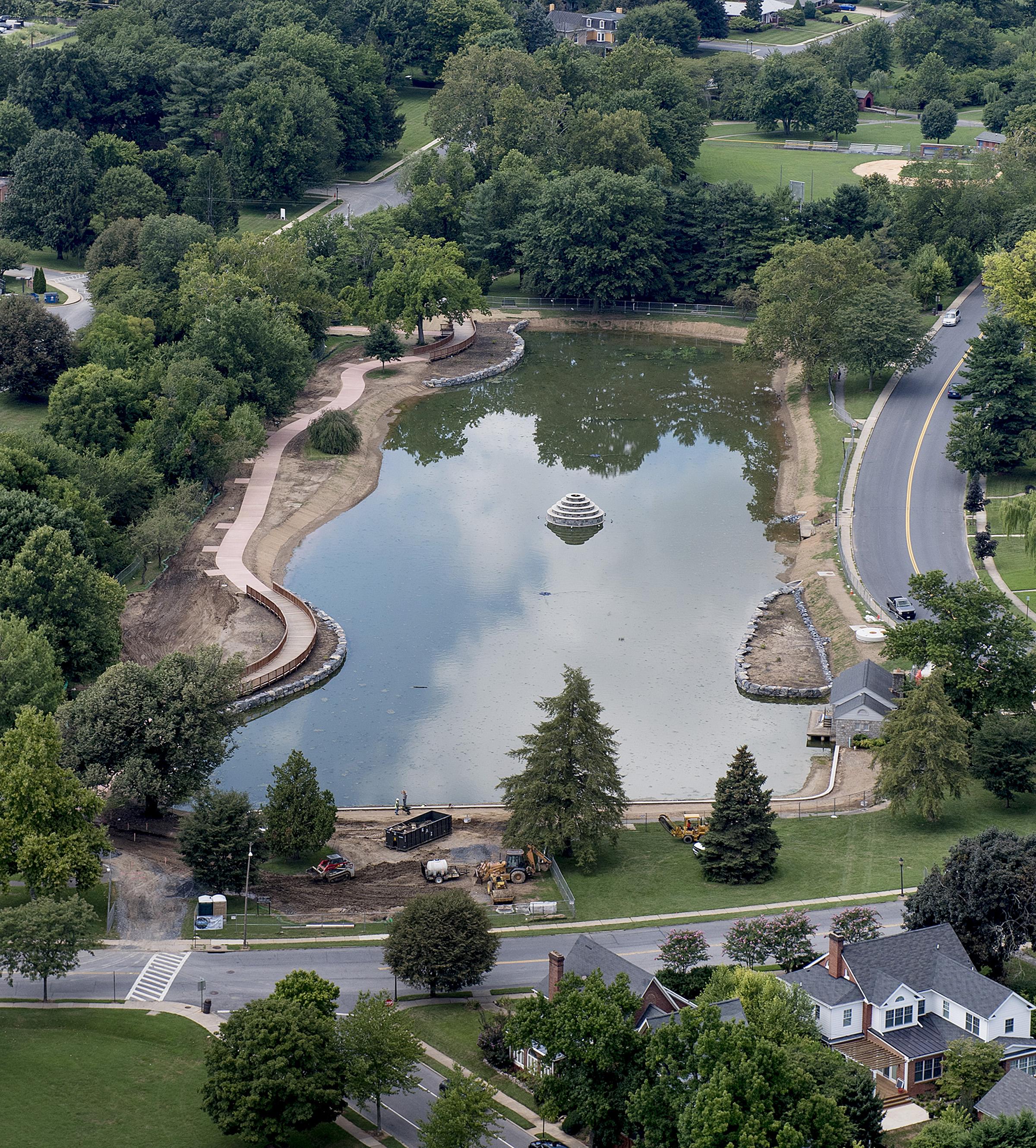 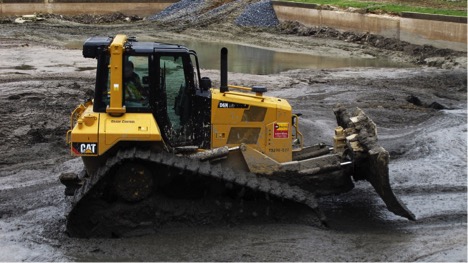 A thick layer of sediment accumulated over the 76 years since the lake’s construction.

After 5 years of planning and 7 months of messy, muddy work, Culler Lake has a brand new beautiful appearance. The City of Frederick awarded a major contract to Morgan-Keller Inc. to revitalize the cherished park. Work began in February under the direction of Project Manager Doug Gray and Superintendent Todd Sharpe. 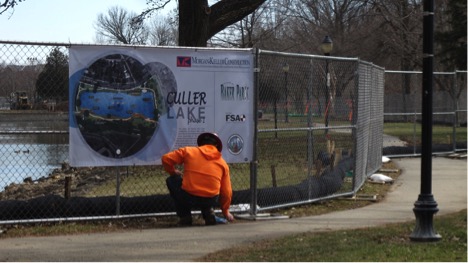 The first step was to drain the lake. Inflows from Carroll Creek were halted, allowing the lake to drain naturally. Then portable pumps removed standing water and seepage from several active springs in the lake bottom. After filtering, lake water was released into Carroll Creek. 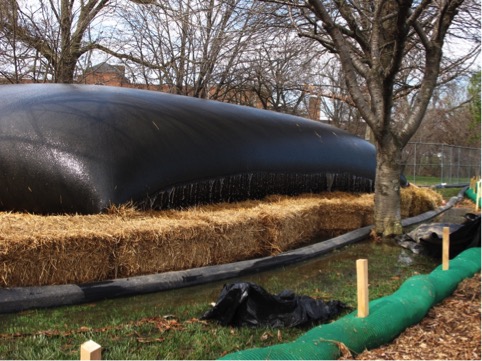 Great care was taken to minimize environmental impact. Water pumped out of the lake was filtered before discharge into Carroll Creek. 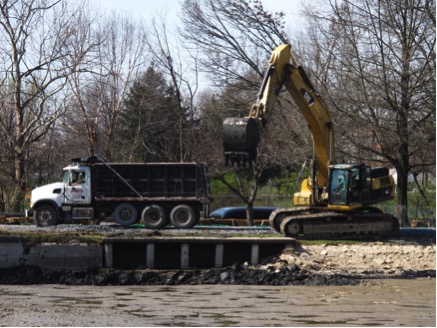 The volume of sediment removed from the lake could fill 2 Olympic size swimming pools.

Subcontractor Justice Excavating hauled 1,092 truckloads of sediment from the 76-year old lake bottom. That amounts to 6,552 cubic feet of material, more than the volume of 2 Olympic size swimming pools!

By September, the construction crews departed, leaving a revitalized landmark in their wake. Gone is the rigid depression-era rectangle and its hard concrete rip rap border. In its place, a more pleasing and functional design that will improve storm water management and enhance water quality with mechanical and biological systems. 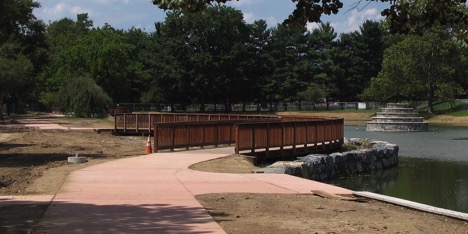 A new shared use path joins a wide bridge over the newly planted wetlands.

Three aquatic wetlands, bordered by prominent bolder walls dominant the shoreline. The 2 wetlands on the creekside of the lake include gracefully curved bridges. These 10-foot wide spans, constructed of durable tropical Ipe hardwood, tie into the new shared use path that transits the lakeside. They also provide an intimate viewing area of the wetlands. Newly planted aquatic vegetation on the surface, and microorganisms in the gravel base will absorb excess nutrients from the water. Poole Landscaping planted the wetlands and 4 swaths along the shore with native aquatic plants.

On the 2nd Street side near the Skate Hose, a 12-foot diameter concrete disk marks the location of another important component. Called a hydrodynamic separator, this mechanical device pre-treats storm water runoff from the nearby residential area. It screens dirt, grit, and trash before water flows into the wetland behind it. A grant from the Chesapeake Bay Trust made purchase and installation of this component possible. 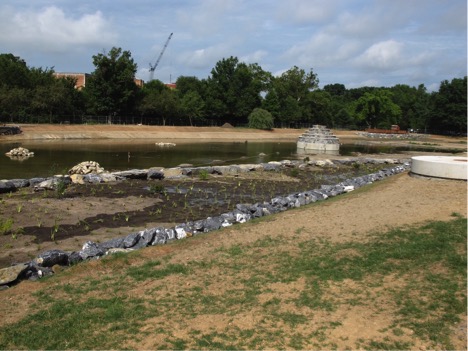 The newly planted wetland can be seen in the foreground as the lake is slowly filling up. The white circular top of the hydrodynamic separator is to the right. Also visible in the lake are 3 of the 5 fish habitats. A small pennant shows the location of a floating fountain and the reconstructed fountain looms in the center of the lake.

The iconic ‘wedding cake” fountain was completely reconstructed. The old fountain was demolished, and its debris repurposed into 5 fish-breeding habitat areas on the lake bottom. The new fountain features an impressive plume of spray that cascades down the sides. Dramatic lighting at the top will illuminate the column of water at night and submerged lighting around the base will cast an enchanting glow. Two smaller floating fountains add additional aeration. 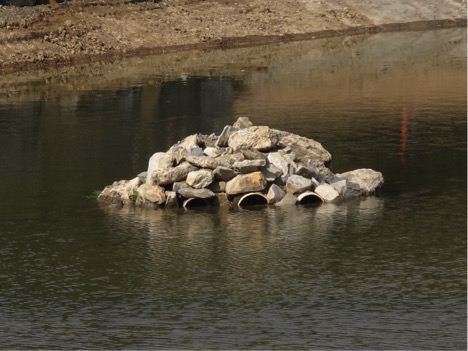 The rubble of the demolished old fountain was converted into fish habitat on the lake bottom. Large pipes provide safe areas for fish.

The new fountain was designed by Clearwater Landscape & Nursery and constructed by Field Enterprises. Substantial donations by Dr. George and Ms. Carolyn Smith and family, Mr.& Ms. Larry Marsh, and other individuals contributed to the fountain’s reconstruction. The Community Foundation of Frederick County supported the purchase of a pump and the conversion of a portion of the Skate House into a mechanical room. 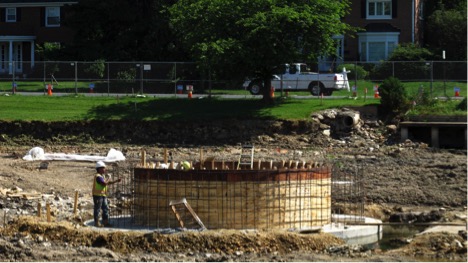 Workers erect framing for the base of the new fountain.

The Culler Lake project has been the beneficiary of significant community support. Notably the Joseph D. Baker Fund, the Delaplaine Foundation, and the Green Walled Garden Club provided generous donations. The Rotary Club of Carroll Creek has identified constructing a pavilion on the lake’s west shore, as their “next big project.” A task that will be incorporated into the next phase of work.

Other improvements include a newly designed retaining wall on the east shore and a wide terracotta-colored cement path along Carroll Creek. Both items were installed by General Concrete who also poured the fountain base structure. Espina Stone crafted the stone veneer around the fountain to match the original material. They also constructed the retaining wall and stone boulder walls.

The project was a true collaborative effort and the work of many hands. The Friends of Baker Park was a catalyst for creating a dramatic new vision for Culler Lake. In 2011, the Culler Lake Renaissance Plan was developed by the DeOcampo Design Collaborative with input from the community. It was the foundation for grant applications to advance the concept. The Chesapeake Bay Trust provided the funds to hire Frederick, Seibert & Associates to develop an overall master plan and construction documents.

The Culler Lake project benefitted from the strong endorsement of our elected officials. Our state delegation including Galen Clagett, Ron Young, Carol Krimm and Karen Lewis Young were instrumental in acquiring $350,000 in state funds. Mayor McClement and the Board of Alderman were champions of the idea, allocating nearly $2 million for the project. 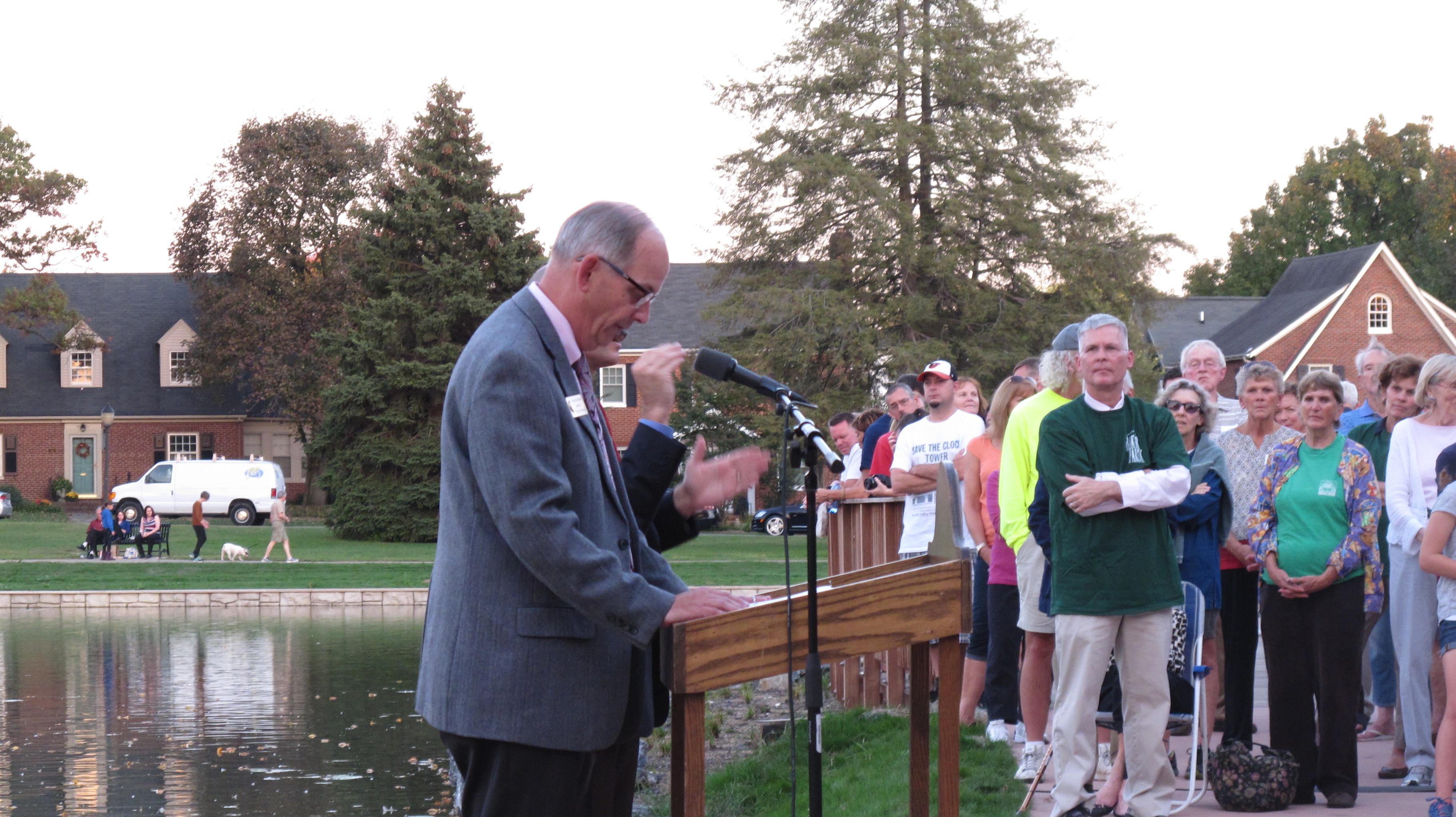 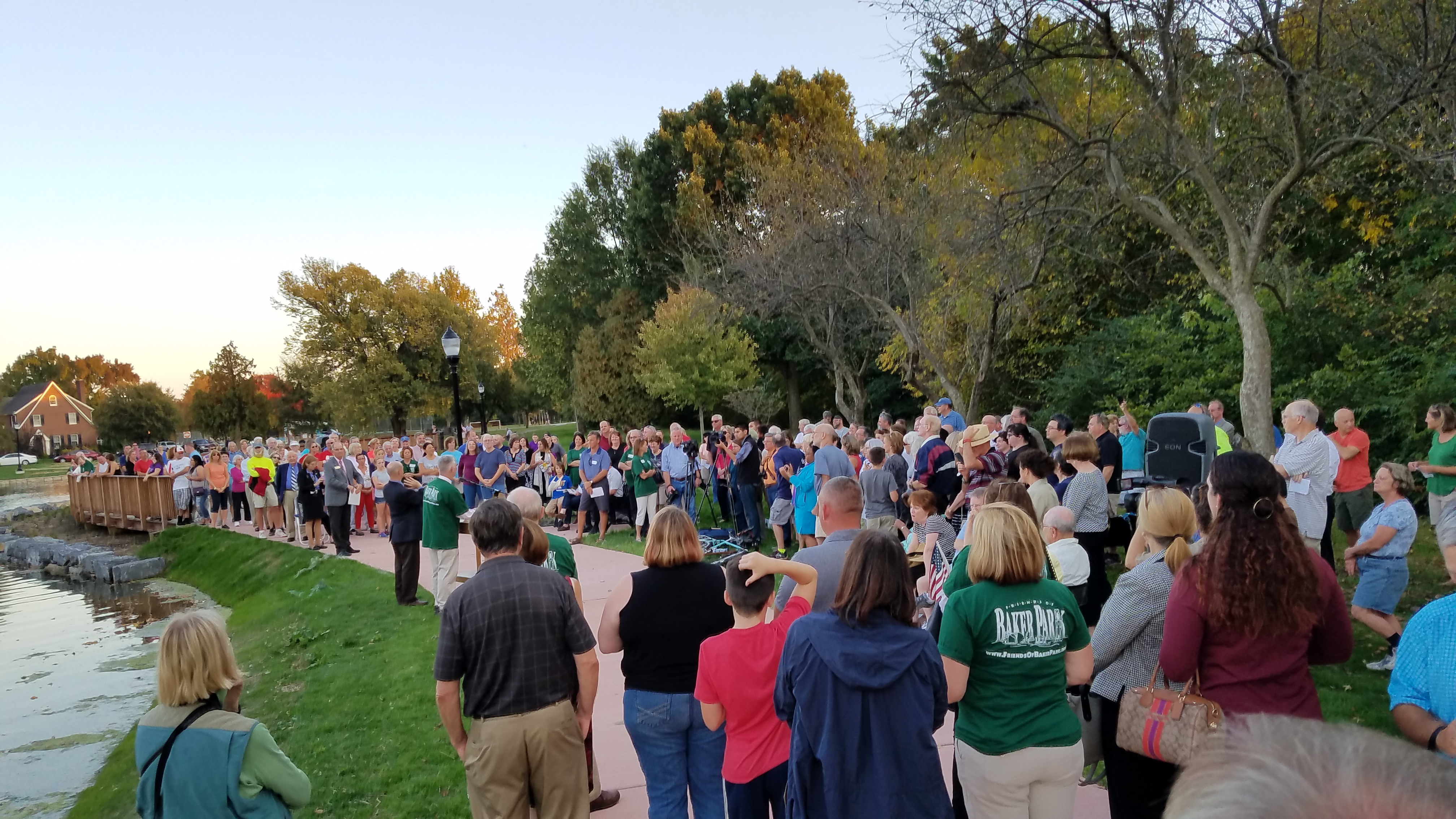 Tuesday, October 18, 2016 the Mayor along with the Friends of Baker Park held a dedication ceremony for the new fountain.

The restoration of Culler Lake is now complete. Our community can take collective pride in this accomplishment. It expanded and modernized the actions of a previous generation. It’s an example of how a local initiative can enhance the quality of life and in a small way, contribute to solving a larger problem, namely improving the Chesapeake Bay watershed.

With the first phase of work behind us, we can look forward to designing additional improvements that will enhance the aesthetic and recreational character of this special place. It’s a tangible legacy to future generations that reflects our conservation heritage.