Shared Use Path Tunnel Under 15 is Complete! 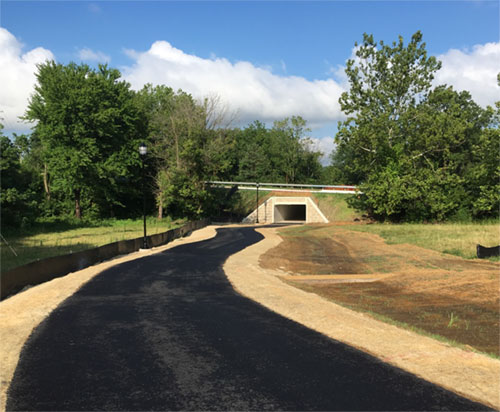 Overseen by City of Frederick Transportation Planner Tim Davis, the tunnel connector and allied pathways between Baker Park and Waterford Park have been structurally completed, linking the western portion of the shared use path that once stopped in Waterford Park with the eastern portion that ended in Baker Park at Route 15. Completed tasks include:

Next up, with completion slated to occur by late August, are:

A ribbon cutting is planned once the site work is completed; a tentative opening of August 29 has been announced.

Planner Tim Davis noted, “ this is the single most important link for bicyclist and pedestrians in the City, bringing safety and access for all to entire west and east sides of the City”

Friends of Baker Park President, Peter Brehm, reported that the Friends of Baker Park are enthusiastic about this transportation enhancement. “This bike/pedestrian link between the west and east sides of Frederick will connect neighbors and neighborhoods as well as foster people getting to and taking advantage of Waterford Park, Baker Park, and the Carroll Creek Linear Park,” he stated, adding “Friends of Baker Park is working closely with Tim and City to complete upgrades to the shared use path between Fairview Avenue and West College Terrace in order to optimize biker and walker experience along the complete length of this path.”

The Pulse of Frederick

The last thing you’d envision when thinking about your neighborhood park is a wild goose chase.

Imagine a grandmother and her two granddaughters performing the traditional ceremony of bird feeding at a murky pond when one of the geese begins his attack. The bird’s loud squawking and wing-beating fury draws the attention of nearby runners, dog walkers, children at the playground, and the group of high school seniors taking prom pictures.

There are no dull moments at the 58-acre linear park, located in Frederick, Maryland. It runs through the heart of downtown Frederick, and entertains many guests including photographers, families, college students, skateboarders and roller skaters, walkers and their four-legged companions, runners, readers, couples, tanners, and all those in between.

With the help of a donation of $13,825 from Joseph Dill Baker to The City of Frederick, the park was established in 1926. It is named after Baker, and features the Joseph D. Baker Bell Tower and Carillon in honor of his memory, both built in November of 1941.

The Bell Tower, designed by John B. Hamme of York, Pennsylvania, is 70 feet high, 16 feet square at its base, and is built of Baltimore County granite. The Carillon is often referred to by the residents as “the Jewel in the Crown of Baker Park” and has 58 bells. Each bell bears the inscription, “The Joseph Dill Baker Memorial.” The largest reads, “This tower and carillon have been erected by his friends in loving memory of Joseph Dill Baker 1854 –1938, whose life was benediction to this community, 1941.”

These are not the only monuments built in the memory of influential people of Frederick at this site. Culler Memorial Fountain sits proudly at the main entry of the park. Installed in 1928, the fountain was made as a shrine to Mayor Lloyd Culler’s daughter, who died in 1923.

Attractions include playgrounds, walking paths, ball parks, tennis courts, Frisbee and soccer fields, a concert pavilion, and a lake. It is a pivotal location in Frederick. Seasonal events are hosted there including the city’s 4th of July celebration with fireworks and free summer Sunday concerts in the band shell. The spot is home to one the city’s two swimming pools; it is also source for numerous family reunions, weddings, picnics, and community and charitable events.

In 1991, Victoria Seward founded Friends of Baker Park, a group of about 200 people who are dedicated to getting the community involved in maintaining, preserving, restoring, and using the communal facility.

“Public parks are critical to the community because they offer green space and access to nature that otherwise wouldn’t be available,” said Peter Brehm, President of Friends of Baker Park. “Valuable friend groups like us help organize citizens’ efforts to offer support, maintenance, and advancement in the community.”

The organization collaborates with other local associations such as The Center of Coastal Watershed Studies at Hood College. This establishment is comprised of Hood faculty, students, and volunteers.

“The students do most of the work,” said Drew Ferrier, Professor of Biology and Director of Hood’s Coastal Studies Program. “Our mission is to work with community and citizen groups. We help them collect and interpret data and we also analyze data that they have already collected. Baker Park is a touchstone for Frederick City. It’s certainly a place of aesthetic beauty and relaxation, but it’s also a venue for entertainment.”

Finding yourself trapped inside of a dinosaur’s ribcage is just one of the bonuses of visiting the park. The Flemming Street Playground showcases Mr. Ed the Dinosaur, an imitation T-Rex skeleton. Taking pictures with this sack of bones is one of the main attractions that call kids from one to 92.

In preparation for a tour of these living legacies planned for next spring, City Sustainability Manager Jenny Willoughby, is seeking nominations for trees in the City of Frederick that might be included on a walking tour of “witness trees” – old specimen trees that have lived through the span of history. A wonderful example is the magnificent Dutch Elm in the center of Memorial Park by the Talley Center.

Candidate trees can be in parks, along streets, on public grounds like schools, and even on private property (though unless the tree on private property can be seen from a street or alley it may not make it on the final list). Regardless of its location in the City of Frederick, if you have a tree to nominate, please email its location and a description (and preferably the type of tree it is, though this is not required) to Jenny at  jwilloughby@cityoffrederick.com.

Frederick City residents are invited to participate in tree identification and inventory training sessions, the first stage of a larger urban tree canopy inventory for the City. Those residents who are trained in identification will be asked to assist neighbors in spring 2015 to inventory trees on private property. Trained volunteers will collect data about tree species and size in an effort to better understand the City’s tree diversity and help homeowners understand the intangible value of trees in their own yard and neighbors’ yards. Ultimately, homeowners will have the opportunity to learn the trees growing in their own yards and the value of those trees for air quality, water quality, and energy savings. In addition, the City will gain more detailed information about tree species diversity and how to better prioritize outreach and tree planting efforts.

Though the inventory will begin in spring 2015, the tree identification training will begin September 17. Neighborhood Advisory Council areas 6 and 9 will be inventoried during the first stage as a pilot and the fall training courses will take place in those neighborhoods to learn specific trees common to the area. No experience is needed to be part of the project and it is free to all residents. The five-week course runs on Wednesdays beginning September 17, 6-8 p.m. The first session will be at the Hood College campus. Residents can register via email to Jenny Willoughby jwilloughby@cityoffrederick.com.

At its annual meeting, Friends of Baker Park board members (standing, left to right) Roberta McNamara and Betsy Fisher plus (seated, left to right) Jen Waldo and Sarah Costlow announced a calendar photo contest called Picture Your Park for a 2015 Friends of Baker Park calendar being printed in the fall of 2014. Photographers are invited to submit up to three high resolution color photo images in landscape (horizontal) format on any aspect or interpretation of Baker Park’s Culler Lake area. Photos should be submitted by email to FriendsofBakerPark@gmail.com along with the photographer’s full name, address, and phone number. The word “photo” should be in the email subject line. Submissions will be reviewed by a panel of judges. Selected photographs will be featured along with the photographer’s name in the 2015 Friends of Baker Park Calendar. Entries are due by July 1; winners will be notified bySeptember 30, 2014. The calendar is sponsored by Friends of Baker Park and will include events from Celebrate Frederick and the Downtown Frederick Partnership.

Get Involved: Frederick’s 4th of July

Friends of Baker Park, Inc., is a non-profit, volunteer-staffed community service organization dedicated to fostering community involvement with Frederick City Government in the preservation, restoration, use, and maintenance of Baker Park. We’re also proponents of supporting activities in the park that contribute so much to making Frederick City a great place to live, work, and play.  Celebrate Frederick recently distributed an email seeking volunteers to assist with several activities taking place in Baker Park on the 4th of July. We’re relaying this in case you or someone you know can help out and also so you can start planning to take advantage of these activities if your holiday includes staying in town to enjoy the park and evening fireworks. Activities and links are below; contact Corinne Farneti of Celebrate Frederick at farneti@msmary.edu with any questions. If you or someone you know are interested in helping as a volunteer at Baker Park’sJuly 4th celebration, just go to http://www.celebratefrederick.com/volunteer to sign up. We are recruiting for barricade monitors, staff at our peanut butter and jelly tent, and volunteers for our information booths. Learn more about Frederick’s 4th at http://www.celebratefrederick.com/events/fredericks-fourth/.

Shared Use Path Plan Under Route 15

At the recent Annual Membership meeting, City of Frederick Engineer Tim Davis spoke of the plan to place a tunnel under the south bound ramps of Route 15. This work is part of the 27 mile shared use path and will link Baker and Waterford parks. The project is currently in the design phase with about 60% of the design documentation complete. Construction begins in spring of 2015 and will be complete in late summer of early fall of 2015.

Tim discussed many of the project amenities under consideration including “green” path surface materials, way-finding signage, crime prevention through environmental design, conformity to ADAm solar lighting in the tunnel, and native species for landscape restorations.

Dog poop left on the ground does not fertilize the ground or just magically disappear. It is picked up by storm water runoff and runs into storm drains that ultimately empty into the Chesapeake Bay. This water is not treated or cleaned before it enters the bay, so pet waste is a significant contributor to water pollution. It also presents health risks to humans and pets. Pet waste carries bacteria, viruses, and parasites that can make people, especially children, sick. YOU can make a difference by making this pledge and encouraging others to make it too!

Download the form and drop it off at City Hall

Linking Waterford and Baker Parks via a Shared Use Path

City of Frederick Engineer Tim Davis debriefed Friends of Baker Park board members in October, 2013, on the planned design and construction timetable for a shared use path that will link Waterford and Baker Parks. Information contained in this plan includes the project’s timetable plus a map of the planned route and descriptions of both an elevated path over Carroll Creek and an underpass under the Route 15 on / off ramps from Rosemont Avenue.  Please let Friends of Baker Park know of any feedback you have on this plan. Download the plan.